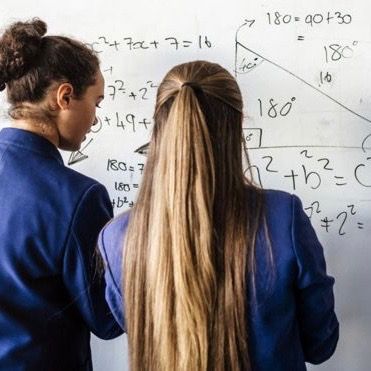 At the last budget The Chancellor, Philip Hammond, announced that there would be extra funding for Maths in education. He also went on to say that Maths skills are key to “cutting edge” jobs of the future.

As far back as I can remember we have acknowledged the importance of Maths and English as THE crucial subjects studied in school. That fact is not only underpinned by their core status at GCSE but also at Ks2, where they are the only subjects to be tested in the SATs. That alone has been enough of an impetus for parents up and down the country not to hesitate to seek out a bit of extra help for their child if they happen to be ‘lagging behind’ in either Maths or English whilst doing well in the other or indeed in other subjects.

The part that English has across the curriculum is fairly obvious. If literacy skills are not up to scratch then a child is possibly not able to make the fullest sense of many of the other subjects which rely on their ability to be able to read and understand some complex terminology. Although it might not play as broad a role across the curriculum as English, Maths, as The Chancellor has alluded to, is going to play an ever greater role in an increasingly technological society, with many more jobs dependent on it as a prerequisite. With one eye on the future, we all need to be doing what we can to prepare our children to the best of our abilities for life beyond the second half of the 21st Century.

Unfortunately for many, the funding that was promised in the recent budget is only for Maths taken beyond GCSE, such as AS level and further Maths. That being the case it may well be that your child is going to need a bit of extra help to access the additional funding. Even if they are not intent on studying Maths beyond GCSE, a solid grasp of all aspects of it is clearly going to be crucial for their job prospects, as we are all witness to just how quickly the world is now moving and changing on a technological level.

By pure coincidence we received a lovely message from an ex-parent, who only left us when they relocated to Wales, on the day of the budget announcement. In her message she told us that her daughter, whom we used to tutor for both Maths and English, had achieved A* in both of those subjects and other good grades across the board and the mum kindly said that she firmly believed it was all down to our input during the formative years which helped build the foundation of this quite surprising success. This anecdotal evidence alone giving credence to the old adage; you can never start too soon. So whether the GCSEs are next year or even the next decade it is always worth you as a parent, having one eye on the future.

And ask yourself whether you are fully confident that your child's Maths Skills are where they should be right now in order to help secure their future.